Britain’s decision to leave the European Union was a historical event. The arguments for both staying and leaving were heavily scrutinised and passionately argued throughout the campaigning period which took place leading up to the referendum on June 23rd. One of those arguments, projected as a benefit of leaving, was that Britain’s economy would be free of the overly intrusive and cumbersome red tape of the EU, and thus promote more entrepreneurship, innovation, competition and economic growth. Looking at Europe’s tech sector, this argument may hold some truth.

The European Union prides itself in having the biggest single market in the world; it boats over 500 million potential customers and makes up 16.5% of the world’s total output. Yet, when looking specifically at activity in the European technology industry, the numbers are less impressive.

Europe produces just 25% of the revenue generated from the global technology market, at $678 billion; a number which has been dwindling for a number of years (see above). Europe’s share within individual sub-markets, such as software and IT services, has, for the most part, either decreased or stagnated between 2012 and 2015, according to AT Kearney, a management consultant firm.

But what exactly are the policies that are holding Europe’s tech sector back? One example could be the EU’s rules on net neutrality, which relates to the equal distribution and treatment of data travelling on the web. Earlier in the year, Europe considered regulations that would permit the prioritisation of certain internet traffic. So called ‘fast lanes’ can be given to ‘specialised’ traffic, like medical services, to avoid such traffic being slowed down in transmission. But such regulations, while they have their justifications, can have the impact of limiting competition as well as consumer choice. America is much more tolerate of net neutrality, and may be one of the reasons why a wide range of internet companies have been allowed to grow and thrive. Alternatively, establishing fast lanes creates higher barriers of entry for small businesses trying to utilise the internet to sell goods and offer services in Europe, since consumers may have to pay to access them. Innovation and a greater choice of services tailoring to different needs become more scarce.

Additionally, the aggressive approach to big technology firms operating in the continent presents Europe as a difficult place to do business. In May the European Commission proposed rules to regulate online platforms, including how to deal with hate speech and other digital properties. Most recently, European courts ruled that technology giant Apple had its tax bill “illegally” cut in Ireland and must as a result payback the billions of Euros the company has apparently avoided in taxes.

The crackdown on tax avoidance may, of course, be reasonable; the amount that Apple has been ordered to pay back would be enough to build 100,00 homes for the poor in Ireland. But such aggressive approaches to policy have the effect of giving Europe a tainted image which depicts the continent as more favourable of regulation over innovation.

Contrastingly, the EU-US Privacy Shield could be seen as an example of European policies helping to sustain the growth of the digital economies of both America and Europe. After the previous legal framework used for data transfers to and from Europe, known as Safe Harbour, was struck down, the Privacy Shield now provides as the new framework that companies can now start signing up for and using. The new framework seeks to do a better job at protecting Europeans’ data from unwanted snoops. The agreement means that American companies like Facebook and Google can continue to access the European markets, granted they follow the rules on data protection, and in turn gives European consumers the ability to use these popular platforms.

Yet even the Privacy Shield has its problems. Max Schrems, the Austrian academic who’s lawsuit led to the demise of the Safe Harbour, has expressed scepticism of the new framework. “Privacy Shield is the product of pressure by the US and the IT industry – not of rational or reasonable considerations,” he said shortly after the new laws were passed.

All the while Europe’s tech industry continues to decline. But the policies of the EU are not entirely the sole cause. Dominant American companies have created high barriers to entry in Europe which has played a part in the relatively low number of technology startups emerging out of Europe. Of the top 100 ICT companies in the world, only nine have headquarters in Europe. Plus, even if European companies manage to grow within their dedicated niches, they often succumb to buyouts by larger firms, particularly from the US or even Asia. 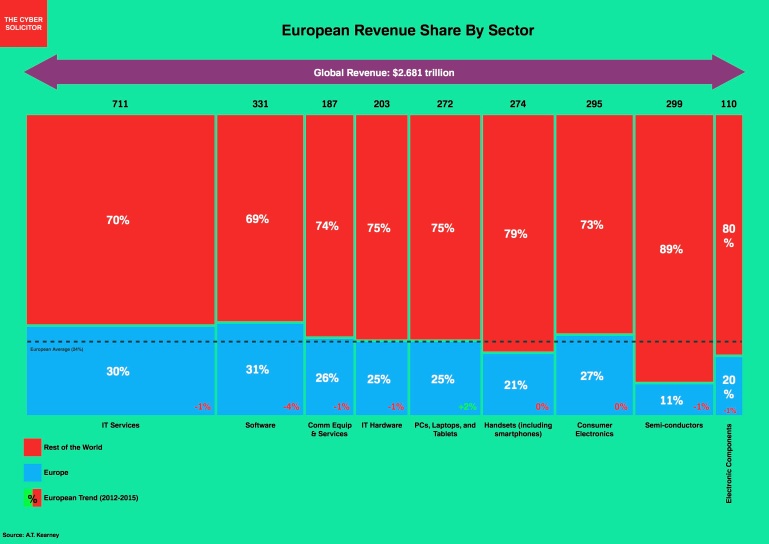 Of all the members within the EU, Britain has been the shining star when it comes to tech. According to GP Bullhound, a tech investment bank, over a third if tech ‘unicorns’ (companies valued at over $1 billion) were founded in the UK. This includes companies like Asos and Zoopla. But there are other successful tech companies outside of Britain, including music streaming service SoundCloud and online broker EToro, showing that Europe’s tech industry is not completely underperforming.

Nevertheless, more could be done. Perhaps Brexit may encourage a more lenient and entrepreneurship-friendly culture in Europe to boost economic activity in its tech sector and other parts of the economy, to discourage other countries from following Britain’s footsteps in quitting the union. For now, it remains a lowlight of Europe, but a few bright sparks certainly show potential.